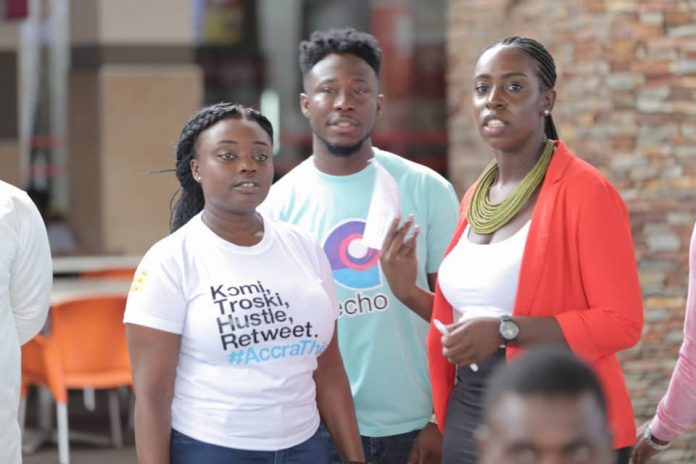 Social media plays such a key role in the everyday life of people everywhere.

With this in mind, Echo House Ghana was excited to share the second edition of Social Media Week Accra (SMWAccra) 2018 following its massive popularity last year.

The 5-day event is centered on topics ranging from individualism, community, and the gaps that bridge them and features industry experts like Ann Sackey, Marketing Manager at DSTV, Yaa Boateng, Creative Director and Business Unit Head at Renegades Africa among others.

In Case You Missed It…
SMWAccra 2018 launched on Monday with the CEO of Vodafone, Yolanda Cuba, Marketing Manager of the Accra Mall, Denise Asare, the Mayor of Accra, Hon. Mohammed Adjei Sowah, a representative from the Communication Ministry as well as the CEO of the Ghana Tourism Board in attendance.

It was followed by a “Mukase Cooking Masterclass” and “Closer Doesn’t Mean Colder”; a session at the University of Ghana, Legon that focused on some of the problems of social media and how to overcome them.

Day two kicked off with a yoga class and sessions during the day that looked at “the Future of Digital Business” and “the Gig Economy” in Ghana.

There’s Still Time
If you missed out on the first two days of SMWAccra 2018, there’s still more for you to get involved with.

Day three is all about brands and includes a “Facebook Masterclass”, lessons on how to turn your startup into a major brand and  the “Blogging and Social Media Awards” to end the day.

On Thursday, discussions will be centered around tech and environment.

Sessions include “Harnessing the Power of New Technology”, a “Major Keys for Content Creators” masterclass and “the Rise of New Media”.

With a discussion on “the Goldfish Effect” and how to engage consumers effectively in 5 seconds, a YouTube masterclass and a BBC Pidgin Workshop on daring to be different, the event looks to be ending with a bang.

So for all entrepreneurs, bloggers and social media influencers, content creators, media and marketing professionals, don’t miss out on the SMWAccra 2018.

A chance to network, learn and share new ideas, innovations and insights into how social media and technology are changing business, society and culture around the world.