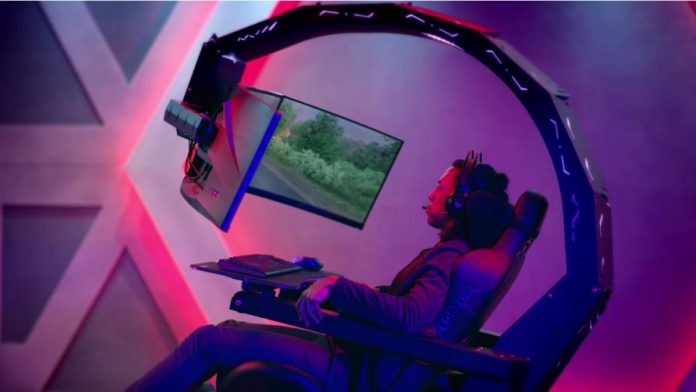 Acer strikes hard at IFA 2018 with a product that is either wildly absurd or unbelievably genius.

The Predator Thronos is a ‘chair’ with a giant overhead brace that supports THREE 27-inch gaming monitors, along with the integrated space for a Predator gaming PC.

It is 1.5m and weighs over 485 pounds, with a steel structure and motorized cockpit for adjusting your screen setup.

It is less of a place to sit and more of a convenient way to let you live inside your gaming PC.

The chair is also capable of deep impact vibration, vibrating in sync with the games you’re playing.

It also reclines up to 140 degrees and it features a foot rest.

One downside of the Thronos is that despite nearly encasing users in a gaming PC, there’s no integrated speakers, meaning gamers have to hook up their own or use a pair of headphones

This seems like an oversight for a device that shoots for overkill in every other respect.

To go along with the Predator Thronos, Acer also announced two new 27-inch monitors that you willl ostensibly be able to use with it.

There is also the cheaper Nitro XV273K which starts at $899.

Acer hasn’t offered a price or release date for the Thronos, but it likely won’t come cheap, even before you consider the cost of a gaming PC and three 27-inch monitors.

HYUNDAI REVEALS A SKETCH OF ITS 2019 HYUNDAI SANTA FE SUV