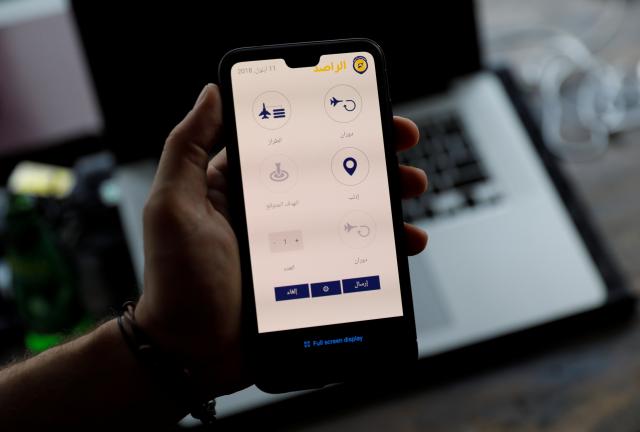 After working with Syrian civilians for the U.S. State Department, John Jaeger and his business partner Dave Levin, founded the app.

“I recognized that the biggest threat to peace inside of Syria was the indiscriminate bombing of civilians,” Jaeger explained.

“We simply thought that there was more that the international community could and should do to warn civilians in advance of this indiscriminate violence,” he added.

Their company, Hala Systems, says it has received funding from countries including Britain, Canada, the Netherlands and the United States as well as private donors.

How It Works
The program, named Sentry, processes data uploaded by a civilian who spots a Russian military aircraft in the sky.

Another civilian who spots the same aircraft, enters all three details into his own app.

Sentry then estimates the plane’s trajectory and sends a warning; triggering Facebook and Telegram messages, tweets and most importantly, loud sirens throughout rebel-held cities in Syria.

Before Sentry, the main warning people had of an airstrike was when they heard the plane themselves – too late to seek shelter.

Speaking via Skype to Reuters, Omayya, 50 said, “There was no use for one to do anything. Sometimes we would actually see the barrels as they fell,” referring to the barrel bombs – oil drums filled with shrapnel and explosives – dropped across rebel areas.

“We would watch and see the barrels fall and the children would cry.”
Omayya attended a course run by volunteers about Sentry and how best to survive air strikes.

Naela, one of the volunteers said one of the main targets of the campaign are women: “Women always carry their mobiles with them, so they get the message wherever they are, whether they are at home, in the kitchen, with their neighbor.”

“Before, whenever there was bombardment, we wouldn’t have knowledge of a strike until the wounded reach us,” Yousef, a 23-year old nurse in a field hospital outside Aleppo said to Reuters.

“But now with Sentry, we immediately find out through our mobile that a strike happened. So we know that it’s in this area, where there are civilians. So we know there are wounded for sure.”

This helps the hospital notify doctors, ensure materials are prepped, and wait for the wounded.

“We hugely depend on (the system) because it’s become the foundation of our work,” he said.