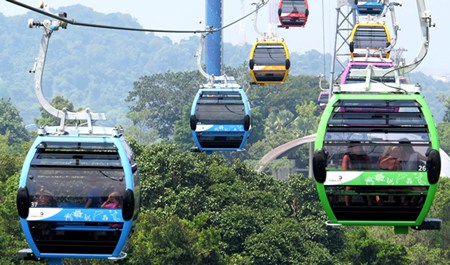 Ghana has been working towards the implementation of cable cars and shuttle passenger services as an alternative means of transport along the coast.

The initiative which was introduced by the Ministry of Transport will be piloted from Tema to Accra as well as from Accra to Takoradi when implemented.

The Minister of Transport, Kwaku Ofori Asiamah at the Ministry’s mid-year review conference held in Koforidua said, “the Ministry is considering other alternative transport solutions including pedway, cable car, and shuttle passenger services by sea (from Tema to Accra and Accra to Takoradi along the coast).

“The cable and pedway systems depend on the use of cables or beams instead of the road space.”

He mentioned that, the introduction of the transport is in line with the changing trends of technology.

“The provision of the transport infrastructure and services is dynamic and ever-changing.

“Generally, we are used to four main modes of transport namely; air, rail, road, and water. However, with the advancing technology, there are new and emerging modes which as a sector we can explore”, he noted.

He explained that, the idea would be brainstormed at one of the sessions and as such urges participants to come out with proposals that protect the interest of every Ghanaian and also encourages innovation.

Mr. Ofori Asiamah added that Ghana has seen the proliferation of digital taxi platforms such as the Uber and Taxify services.

He indicated that although they have improved accessibility and comfort, they have to conform to the necessary regulations.

GOVERNMENT TO COMMENCE THE CONSTRUCTION OF ULTRA MODERN BUS TERMINAL IN...