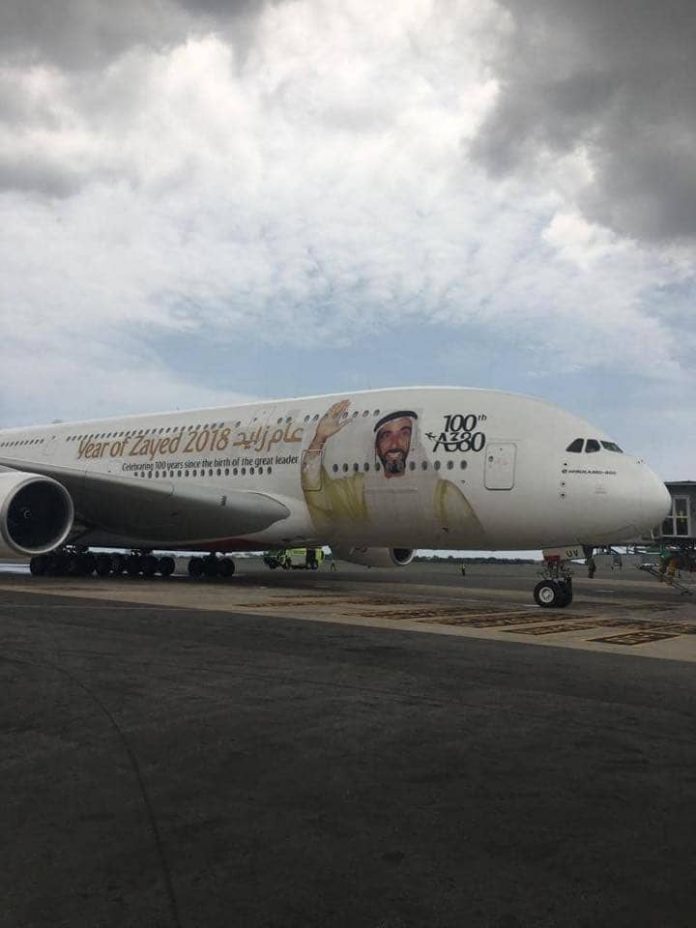 Emirates A380 aircraft, the world’s largest airbus, touched down in Ghana on October 2 at the Kotoka International Airport, in celebration of the opening of Terminal 3.

Emirates Airlines’ flagship aircraft landed at the Kotoka International Airport in Accra, Ghana around 11:55am in a one-off service to the country.

In its first-ever flight to Ghana, Emirates also partnered with the Kotoka International Airport to test the operations and infrastructure of Terminal 3 to accommodate an A380 aircraft.

Speaking at a reception ceremony for the Emirates A380 in Accra, Orhan Abbas, Emirates’ Senior Vice President, Commercial Operations, Africa said: “We are honoured to bring our flagship A380 to the impressive new terminal at Kotoka International Airport, as it demonstrates its full capabilities with the handling of the first A380 aircraft.”

“It shows the importance of Ghana to Emirates; for us to bring the A380 to West Africa and to Ghana is milestone by itself,” he said.

“It should show you the commitment we have to Ghana, its aviation sector and to the market.”

Abbas remarked that Emirates was happy with its operations in Ghana over the past 14 years and would soon celebrate its 15th anniversary.

“The Accra route is doing very well for us and I think looking at Ghana, it will expand further,” he said. “Now that you have this world class facility, you are helping your own market to grow.”

Mr Joseph Kofi Adda, Ghana’s Minister of Aviation, hailed the A380 flight as an important milestone for Ghana and a demonstration of the advancement of the aviation industry in Africa and Ghana.

“This landmark achievement will no doubt further improve our two countries’ bilateral reciprocal economic activities and create job opportunities for the benefit of our youth, which is a major goal of Government,” he said.

About the Emirates A380
The Emirates A380 is set in a three-class configuration, with 426 seats in Economy Class on the main deck, 76 flat-bed seats in Business Class and 14 First Class Private Suites on the upper deck.

Once the A380 reaches cruising altitude, passengers in the First Class can enjoy Private Suites, and Shower Spas, an Onboard Lounge for First Class and Business Class passengers that offers a wide range of drinks and canapés, as well as space to socialise or simply relax at 40,000 feet.

Passengers travelling on the main deck in Economy Class can enjoy stretching out in seats with a pitch of up to 33 inches.

Passengers in all classes will enjoy Emirates’ multi award-winning inflight entertainment system, ice, offering over 3,500 channels of on-demand entertainment. The largest selection of programming in the sky includes a broad selection of movies, shows, music and other programming from Africa, and up to 20MB complimentary on-board Wi-Fi.