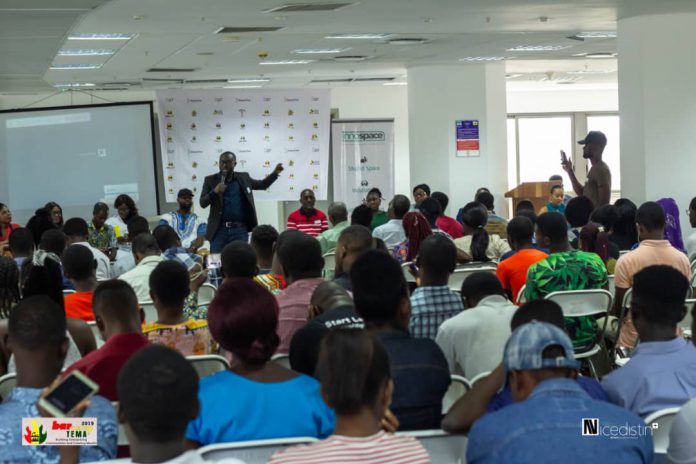 Entrepreneurship in recent times has been identified as a major factor that contributes to the growth of most nations. Over the years, the proliferation of unemployment amongst the youth has been an issue of national concern. In this regard, organization such as GhanaThink Foundation, which organizes practical workshops for the youth across Ghana has been formed, to educate and help them develop their skills and talent.

GhanaThink Foundation, organized the 8th edition of Barcamp Tema; a free networking forum, targeted at bringing the youth within the nation together for a day of learning, sharing, networking  and mentoring .

The event which was held at the Ghana Ports & Harbor Authority under the theme, ‘Building Enterprising Communities and and Creating Wealth’ engaged young people who are very able and ingenious in business to create wealth to drive sustainable growth.

As part of the event, workshops, training and mentorship sessions were held to adequately equip participants in developing their own businesses.

With a pool of over 20 mentors at the event, participants had the chance  to interact with their mentors face to face and  share ideas.

During the event, it was indicated that individuals in communities (especially the youth) must be taught  how to develop their skills and talents to help solve the unemployment menace.

Diana Setsofia Agbenyo, Founder of  Consulteen Ghana and Tornui Fashion Solutions adviced that, the youth should inculcate the habit of starting their businesses in a small way no matter the capital they have.

Team leader of the Barcamp, Benjamin Adadevoh, mentioned that the initiative since 2012 has given many people the opportunity to access jobs, aside making them vibrant and critical thinkers.

According to him, “Education is key but  getting the practical experience is very necessary to stay relevant”.

He mentioned that Barcamp later this year will be organized at the capital of Ghana to open doors to the youth across the country.

He also mentioned that, they are looking at taking it beyond Ghana to bring people together in terms of developing, planning and executing business initiative to influence society.

Barcamp Tema Resources Lead, Peter Asare Nyarko in an interview also revealed that, Barcamp has groomed the youth in most communities it finds itself, to be entrepreneurs who mostly come up with innovative ideas to help their communities.

The yearly run event, he said, is not just aimed at training and mentoring but also supporting young innovators who have great ideas but lack the resources to implement them.

Leonard Hagan co-founded Barcamp Tema in 2012 mentioned that, Barcamp Tema over the years has contributed to the general development of the youth in and around Tema. The event, according to him empowers participants through innovative and informative discussions.

Barcamp Tema 2019 according to some participants was inspiring and educative as it opened avenues for partnerships through the networking sessions.

With Barcamp events, GhanaThink Foundation seeks to motivate and deploy African diaspora talent for the benefit of Ghana, Africa and the world.

African Travel Startup Timbuktu Launches in the US