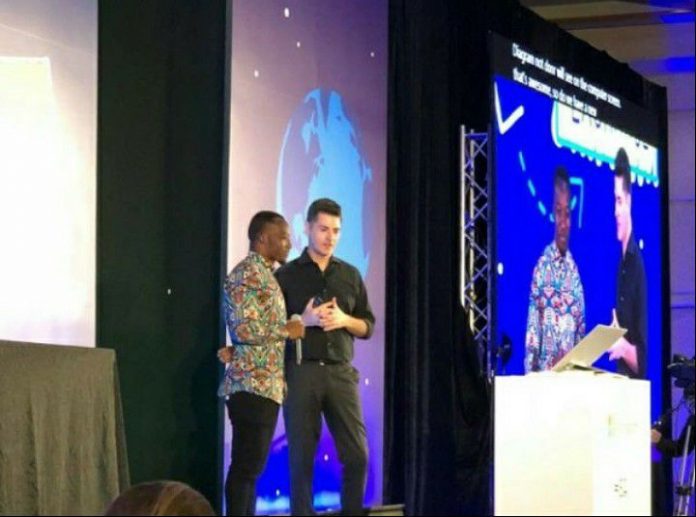 Passionate Ghanaian ICT teacher, who was spotted on social media drawing Microsoft Word window on a blackboard, recieved a standing ovation during his appearance at the Education Exchange Conference in Singapore.

Richard Appiah Akoto, the 33-year-old, ICT pupil teacher, went viral last month after he posted photos of himself drawing the entire Microsoft Word window to enable his pupils understand how the software functions.

As part of Microsoft’s support for him, the teacher, was invited to Singapore for the Education Exchange Conference.

The Vice President for Worldwide Education at Microsoft, Anthony Salcito, commended the teacher for overcoming major obstacles to help his students.

“Your work has really inspired the world. It really shows the amazing innovation and commitment and passion that teachers have for helping their students get ready for the future,” he said.

Richard Akoto in response said he was excited about the support being provided by Microsoft, adding that it was refreshing he was no longer going to the blackboard to teach ICT in his school.

Richard Appiah Akoto in Singapore said, “I wanted to teach them [the pupils] how to launch Microsoft Word.

But I had no computer to show them. I had to do my best. So, I decided to draw what the screen looks like on the blackboard with chalk,” he said.

“I drew the features and labeled them correctly so that they would know what-was-what. Then I drew what you would see on your computer screen after launching Word.

“I have been doing this every time the lesson I’m teaching demands it. I’ve drawn monitors, system units, keyboards, a mouse, a formatting toolbar, a drawing toolbar, and so on. The students were okay with that. They are used to me doing everything on the board for them. When I did this, it was nothing new or strange for them,” he said.

“Something very positive has come out of this and I am very happy. We are no longer going to use the chalkboard again. We will have computers,” he added.

Microsoft however says, it will be working with Richard through a local partner in Ghana to provide device and software support required for his students at the Betenase Municipal Assembly Junior High School in the town of Sekyedomase in Ghana.

He will also gain access to the Microsoft Certified Educator Program (MCE) for professional development, so he can nurture his passion for teaching and build rich, custom learning experiences for his students.

The event brought together over 400 educators and school leaders from 91 countries to discuss the role of technology in education.