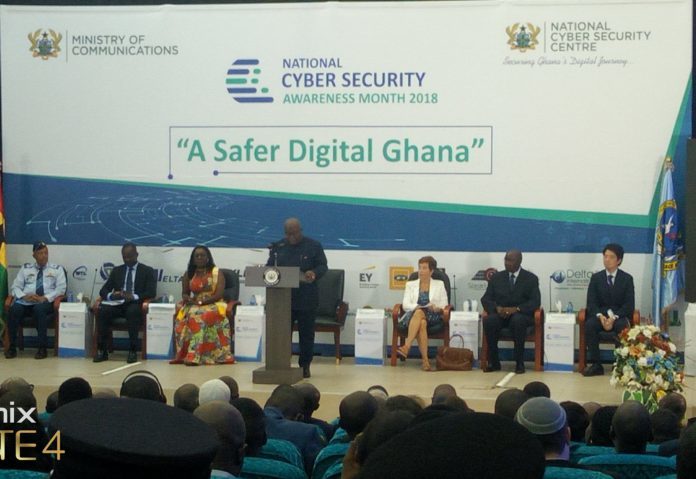 President Akufo-Addo has indicated that, as Ghana is scaling up e-connectivity as part of its digitalization agenda, there will certainly be an upsurge of criminal activities.

Hence, the need to put in place precautionary measures to forestall such eventualities.

President Akufo-Addo speaking at the climax of the National Cyber Security Awareness Month on the theme ‘A Safer Digital Ghana’, assured all attendees that government is going to provide adequate funding to secure the country’s cyber space and establish a cyber-security culture in the country.

According to him,  “Government is going to set up a Cybersecurity academy as part of measures to enhance the fight against Cybercrime, and a National Cybersecurity Authority to oversee the operations of all agencies in the digital value chain.”

He further assured that, government is putting in maximum effort to ratify the deal when the House resumes.

The Minister of Communications, Ursula Owusu Ekuful, also indicated that, Cybersecurity has become one of the dominant issues in the country.

However, the President had amply demonstrated his commitment to Ghana’s cybersecurity ecosystem.

She mentioned that, while the internet is an important tool for social interaction, there are predators out there.

However, the MoC has established the Computer Emergency Response Teams (CERT) as one initiative to secure the cyberspace.

The National Cybersecurity Advisor, Mr. Albert Antwi Boasiako, also indicated that the cybersecurity working group in Ghana was exemplary in the subregion.

“Despite these efforts, we need to scale up our efforts to address the gaps in our national cyberspace legislation, and as well as speed up capacity building efforts for public officials,” he added.