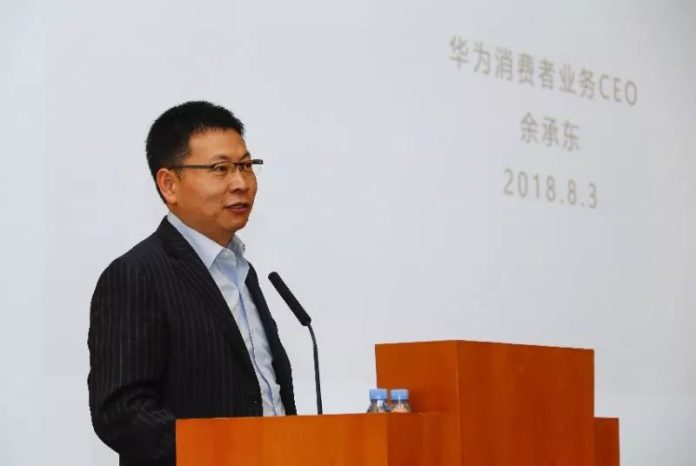 In the first half of 2018, the shipment of Huawei smartphones reached a record high of over 95 million units.

The shipments of the Huawei P20 series reached more than 9 million units worldwide within four months since its initial launch.

The Huawei Mate 10 series continued to have a strong performance with global shipments of more than 10 million units.

There is an emerging “Carrier Battle Group” of products from the Huawei Consumer Business Group.

At the 2018 Quality Conference of Huawei Consumer BG on July 23, Richard Yu said “We do not rely on a single product to fight alone but have a carrier battle group of ‘cruisers’, ‘destroyers’, and ‘frigates’ that provide consumers with full-scenario intelligent experiences.

“Our product portfolio is designed to provide an edge in future competitions.”

Huawei’s mobile phones have undoubtedly taken the role of the aircraft carrier for providing full-scenario intelligent experiences, while the “cruisers”, “destroyers”, and “frigates” in the battle group have also begun to receive a lot of attention.

Although Huawei has not been in the PC market for a long time, its MateBook X Pro has already cemented a strong presence in the high-end PC consumer market, with the highest shipments among online sales (in China) of Windows-based laptops priced 7,000+ RMB.

This product was the first to introduce the use of an LTPS HD screen from the mobile phone industry into a laptop PC.

This mobile phone technology was perfectly integrated into a laptop, helping to bring about an innovative and relatively modest revolution in the field of personal computing.

The number of Huawei wearables has also experienced rapid growth, with a year-on-year shipment increase of 147%, ranking fourth worldwide.

Huawei Watch and Huawei Band ranked first in both sales volume and revenue during the 618 shopping promotions on JD Mall.

The global shipments of Huawei Band have reached 4 million units, occupying a 78% market share among all smart bands at a market retail price of around 1000 RMB.

HUAWEI WATCH 2 Pro and HUAWEI WATCH 2 released this year (2018) have multiple built-in professional sensors to monitor sports indicators, such as heart rate and GPS tracking, as well as additional support for mobile payments (including bus/metro fare payment) as a part of daily usage scenarios.

Huawei TalkBand B5, touted as the best wearable accessory for consumers, includes powerful functions such as a Bluetooth headset, and health & fitness monitoring.

Health is a successful new initiative endorsed by Huawei, with the number of app users reaching over 100 million.

In the mid-range and high-end markets of consumer routers, Huawei has the largest market share in China.

Richard Yu also revealed that Huawei is also entering the home appliance market, not as a manufacturer but a technical standard provider that helps smart home appliances connect to the Internet.

Therefore, in order to achieve this immense undertaking, Huawei has already gained wide support from many of the world’s leading home appliance manufacturers.

MTN TO RAISE $500M FROM SALE OF SHARES IN NIGERIA