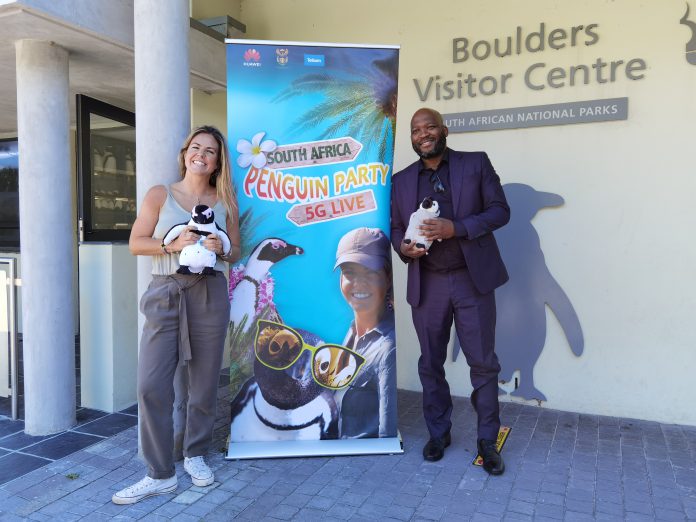 Huawei and Telkom have supported a 5G live stream of Africa’s endangered penguins to highlight role of 5G and supporting technology for conservation and environmental protection as well as other 5G use case.

The live stream from Boulders Beach in Cape Town, home to the largest group of African Penguins in South Africa, hosted on Telkom’s 5G temporary network, was broadcast to Huawei’s global and local social media platforms.

Hosted by conservationist and wildlife TV presenter Lauren Arthur, the live stream not only gave watchers the chance to experience the unique penguin colony, it also illustrated 5G’s potential as an enabler of environmental conservation.

For the Boulders penguin colony, intensive conservation is becoming increasingly important. The African Penguin is listed as ‘Endangered’ on the IUCN Red List of Threatened Species. As the largest grouping of the birds, the Boulders colony is therefore critical to the species’ survival. Its fragility was also underlined earlier this year when 64 birds died following a bee attack on the beach.

As Lunga Siyo, CEO of Telkom Consumer Business, pointed out, 5G technology could prove pivotal in allowing conservationists to monitor the colony.

“If we could set up a 5G camera here, the experts could watch the penguins every movement and of course help prevent another incident like the bee attack,” he said.

“In the future, 5G won’t only enrich people’s digital lives, but will also bring real benefits and change to humans, companies, society, and the natural world,” he added. 5G can be especially beneficial in South Africa’s goal of achieving a digital economy. Siyo pointed out that sectors where 5G was starting to play a role included, health, education, mining and the consumer market.

Siyo also pointed out that Telkom is well poised to roll out 5G across South Africa.

“Telkom currently has the largest optical fiber network in South Africa and many cell masts are already 5G ready,” he said. “I don’t think it will be long before our users will be able to enjoy the convenience of 5G networks.”

Khumbudzo Ntshavheni, Minister of the Department of Communication and Digital Technology said, post pandemic travel is immersive with opportunities for enhanced technologies to give tourists a digital-first experience of a destination. She commended Huawei for the streaming of the Penguin colony, as an innovative way to engage potential tourists from far and wide within Huawei’s reach, to stimulate foreign tourist interest in the area.

Huawei is also involved in several other conservation initiatives, including a project that uses upcycled Huawei devices and Huawei’s Cloud AI to protect rainforests.