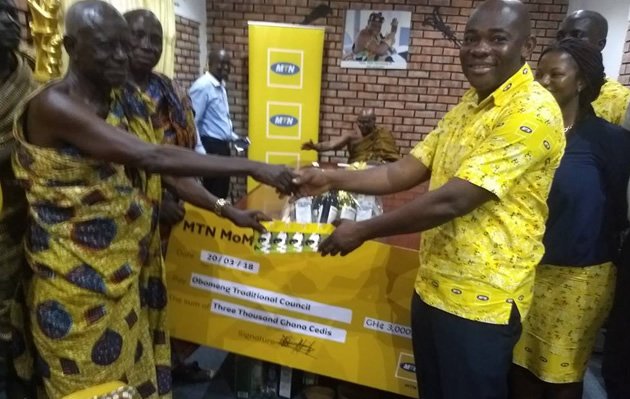 Telecommunication Giant (MTN), has made a donation of GH¢14.000.00 to support the 2018 Kwahu Easter celebrations in Ghana.

The telecommunications giant, also added some assorted drinks, and hampers as well as airtime worth GH¢1,400 to the support package.

The package was handed over by MTN Commercial Manager in-charge of the Eastern, Greater Accra and Volta Regions, Mr. David Gyimah Boadi to the Kwahu Traditional Council .

According to Mr Gyima, there would also be data activation throughout the festival period at some vantage points to ensure that their customers have access to internet services.

He mentioned that the initiative is in line with their company’s effort to promote the culture of Ghanaians through some festivals organized in the country.

Mr. Gyimah noted that, traditional festivals when encouraged and given the needed support, could provide the significant boost to tourism which would bring about economic development.

He said it was on the account of this that MTN had been proud to be associated with various festival celebrations across the nation.

He however, gave an assurance that MTN’s long-standing partnership with the Kwahu area would continue.

The Kwahuhene who is also the President of the Council, Daasebre Akuamoah Agyapong II, thanked the MTN group and appealed to them to help complete a school building project and a Police station which are currently under construction at Kwahu Abene.

He thanked MTN for their consistent assistance in the festival celebration over the past 11 years.