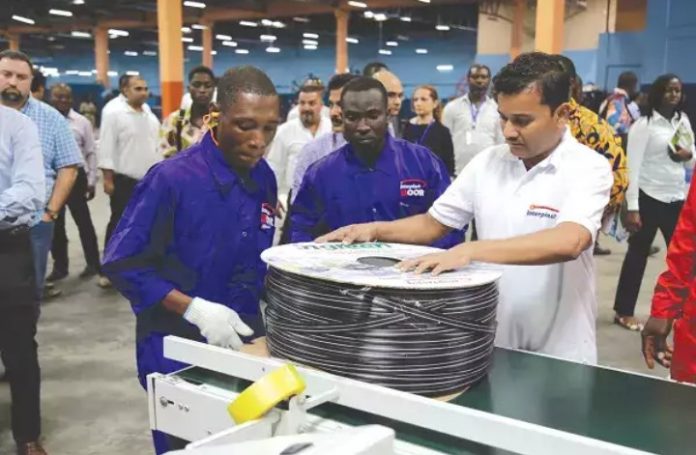 The system which is the first of its kind to be introduced in West Africa is known as Ingreen irrigation solution.

It helps reduce water usage and improves crop quality and yields, as it provides precise amounts of water and fertiliser to the root of crops.

The locally produced Ingreen irrigation solution is expected to cut down the cost of expenditure on farm inputs, as farmers have had to depend on expensive imported systems.

According to Mr Hayssam Fakhry, because the drip irrigation applied water to the roots of the plants, “it ensures that very little water is lost through evaporation and the low flow of water allows large areas to be watered.”

The technology comes in varieties, from a simple system to an advanced one where irrigation managers can operate multiple irrigation systems from office and receive automatically generated alerts on their mobile phones or tablets.

To ensure efficient use of the system, Interplast Limited also provides solutions for irrigation systems for small, medium and large farms with drip or sprinkler systems.

The ultimate goal of Interplast, Mr Fakhry said, was to become a one-stop shop for farmers, where farmers could be assisted throughout the year.

“The Ingreen Drip System, is what the agriculture sector has been waiting for to become an all-year-round productive sector.

“It will augment the government’s One Village, One Dam initiative and boost farming output from year to year and for all seasons,” he said.

Located in Accra, the company exports products to more than 21 West and Central African countries.