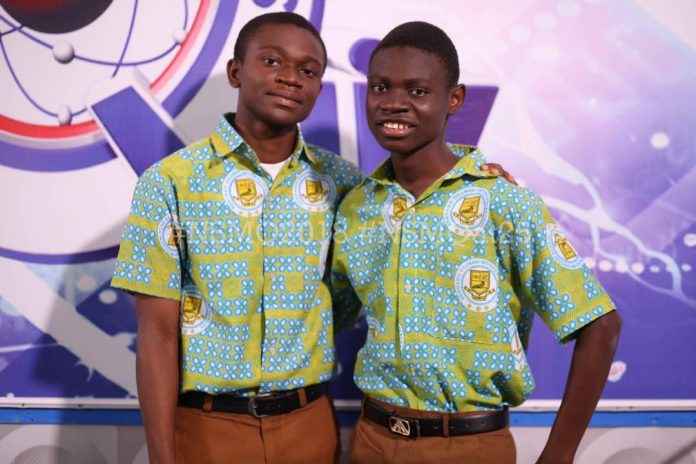 Konongo-Odumase SHS today recorded the highest points scored so far in the preliminary stage of NSMQ 2018.

There was no competition as Konongo-Odumase (Frederick Owusu Kwakye and Agbaa Adam Danjimah) wiped the floor with their opponents.

They emerged winners of the competition with a whopping score of 61 points to Nkonya’s 19 points and Yendi’s 18.

At NNB, there was a very different scenario with Edinaman SHS, EPC Mawuko Girls and Kinbu SHS all scoring under 10 points by the end of the first round.

The end of the competition saw Edinaman (Daniel Mensah and Theresa Terabo Amano) scoring the highest point being 22, with Kinbu and EPC Mawuko Girls scoring 18 and 11 points respectively.

At NNB, the start of the competition was once again discouraging with all three competitors; Nsein SHS, Labone SHS and Boa-Amponsem SHS recording points under 10 by the end of the first round.

Labone (Patrick Kwame Doh and Aligabass Jibril) however pulled through, winning the competition with 28 points, Boa-Amponsem with 22 points and Nsein with 16 points.

At UGBS, the last competition of the day was between Ada SHS, Akumfi Ameyaw SHS and Sekondi College.

Ada (Francis Abayateye and Enoch Ayittah) won this match with the second highest recorded score of the day; 50 points, Sekondi with 32 points and Akumfi Ameyaw with 22 points.

And on NNB, another discouraging start to the competition with St. Ignatius of Layola SHS, Nkroful Agric SHS and St. Mary’s Sem. SHS, Lolobi all scoring below 10 points after the first round.

The end of the fourth round, saw a tie between St. Ignatius and St. Mary’at 20 points and Nkroful just 2 points ahead.

In a surprise twist, St. Mary’s (David Nkunanyi Lukulmor and Yihame Prince Philemon) won the competition with 26 points, Nkroful with 22 and St. Ignatius with 20 points.

GOOGLE TO MAKE AI COURSES AVAILABLE TO ALL