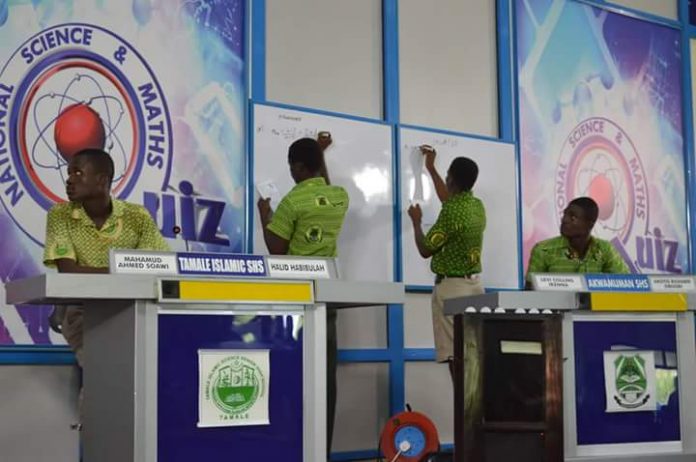 The National Science and Maths Quiz, ended the first of its preliminaries today, with six sets of three schools competing against each other.

At 10am, Notre Dame Girls’ SHS, represented by Hillary Sekyiwaa Aferi and Emmanuella Fosu Nketia, went up against Kissi Annoh Kwaku and Fenny Benjamin of St. Peter’s SHS as well as Emmanuel Owiredu and Danso Jephthah Kwasi of St. Martin’s SHS, at UGBS.

However, St. Peter’s emerged victorious with 49 points leaving St. Martin’s and Notre Dame Girls’ trailing in the dust with 27 and 20 points respectively.

Concurrently, at NNB, the competition was very close with Asante Boateng Victor and Kwarteng Clement of Berekuman Presby SHS, Bozongo Ayisha Saatiyin and Yussif Ilham Zaapayim of Tamale Girls’ SHS and Nnaa Kelvin Awine and Awini A. Emmanuel of Sandema SHTS with 13, 12 and 11 points respectively as of the 1st round.

The end, showed Sandema emerge victorious with 31 points, Berekuman with 28 points and Tamale Girls’ with 24 points.

The second batch of contests at UGBS commenced at 1pm with Abire Emmanuel and Sekyere Paul of Atebubu SHS, Asuma-Dayibor Jeremiah and Sackitey-Ninye Sylvia Esther of Achimota School and Sylvia Mwnnasang Segkuu and Pearl Owusuaa Adjei of St. Louis SHS.

Right of the bat, two time champion Achimota lead the competition with a final score of 44 points, St. Louis with 30 points and Atebubu with 09 points.

At NNB, Kevi Collins Ikenna and Akoto Richard Obuobi secured a spot for Akwamuman SHS in the one-eighth with 40 points.

The final contest, which began at 4pm saw an interesting development where competitors chose to leave questions uanswered rather than answer them wrongly and have their points docked.

Christian Afriyie and Bernard Owusu of Breman Asikuma SHS also dominated the competition at NNB with 17 points in the first round and a final score of 31 points.

Amos Anon-Eta Amolga and Athanasius A. Ataarem of Notre Dame SHS had a final score of 17 points, whereas TI Amass, Ekumfi represented by Princess Adu-Takyi and Isaac Etrue had 13 points.