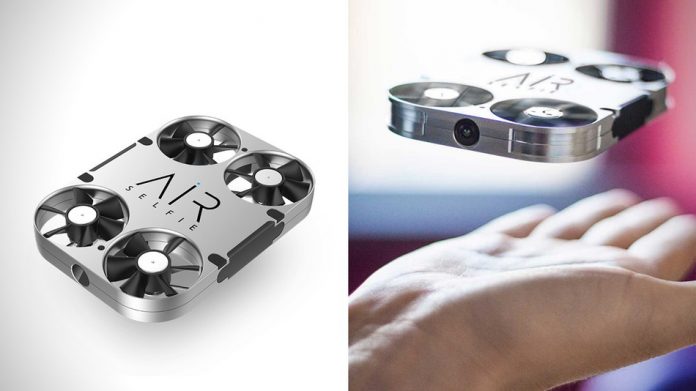 AirSelfie has made a come back with an improved version of its device after its show off at CES 2018 in Las Vegas.

The device known as AirSelfie 2 has an upgraded camera of 12 megapixels with a 50 percent improved battery life.

The drone which is finally available for purchase has quadrupled it’s memory capacity to 16GB.

The machine can soar to a height of 20 metres and allow users to snap lots of images due to its powerful propellers.

Airselfie is the “the first pocket-sized flying camera and the only portable flying camera that integrates with smartphones” both Android and iPhone.

It has a downward-facing ultrasonic sensor which helps it to remain stable as well as  a 240 mAh rechargeable battery.

To use the device, purchasers have to install the App on their smartphone and  control it from the phone.

After shooting the videos, users can safely pluck the drone straight out of the air, or have it descend slowly into their palm.

The pocket sized drone comes in four beautiful colors including gold and silver.

According to the founder of AirSelfie, his outfit saw an increasing demand for a device that goes beyond selfie sticks to allow users to take pictures from all angles, hence the introduction of AirSelfie 2.

“We’re excited to introduce AirSelfie to Millennials and consumers around the world,” he added.

AirSelfie is currently available for purchase.