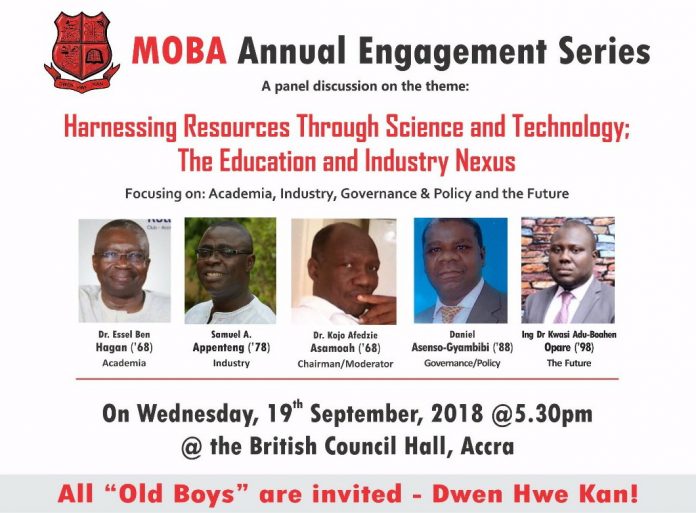 The Mfantsipim Old Boys Association (MOBA) held its third Annual Engagement Series on September 19, at the British Council in Accra.

The theme, ‘Harnessing Resources Through Science and Technology: The Education and Industry Nexus’, focused on academia, industry, governance and policy, and innovation and the future.

The panel discussion was very insightful as it hit some hard truths about the Ghanaian Science and Technology space.

One such truth was the lack of accelerated industrial growth within the country.

According to the Adjunct Associate Professor of the Energy Institute of Distance Learning, KNUST, Dr. Essel Ben Hagan, the lack of practical training and job-related skills at the tertiary level was a driving force in students’ unpreparedness for the job market.

Another point mentioned is the gap education has created in technology and innovation.

Universities were identified as the drivers of economic growth without which there is a lack of human capacity building, which leads to stagnant industrial growth.

Speaking more on the lack of accelerated industrial growth of the country, the Managing Director: Joissam Ghana Ltd. and Joissam Gabon SARL, Samuel A. Apenteng, revealed that before Ghana as a country could push forward, the drivers of this change first need to be identified.

Also the science and policy interface of the country similarly needs to be strengthened; both science and social science need to be developed and industries incentived.

He mentioned that another major role player in the science and technology space is governance and policy.

Industrialization of a country, according to him is dependant on its science and technology policy.

Many polices have been created in Ghana to promote science and technology however, most were not implemented due to misplaced priorities.

Daniel Asenso-Gyambibi, Principal Research Scientist CSIR-Building and Research Institute, Ghana, pushed for policy makers to be made aware of, and to have confidence in the science and technology community.

Finally, innovation cannot come about without science and technology.

With so many sectors including urban planning, education and health are dependant on the growth of science and technology, it is critical that Ghana “raise a generation of innovators who have the skills to create and use science and technology”, to solve problems in the country, said Dr. K. Adu Boahen Opare, Lecturer, Department of Electrical and Electronic Engineering, KNUST.

The big question then is ‘What Next?’ What steps will be taken to achieve digitisation in Ghana?

With the right training at the academic level, awareness in the industries and within government, and using innovation to work toward the future, all of these challenges can be effectively dealt with.

Ford To Introduce Transportation Service On Demand To Speed Up Patient...