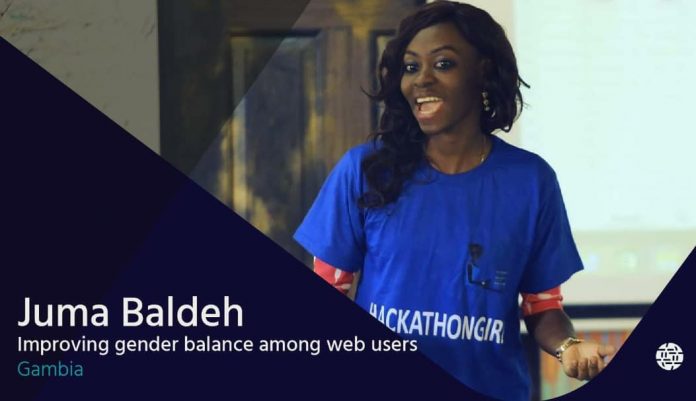 Today’s STEM WOW, Juma Baldeh is a 25 under 25 awardee from the Internet Society, 2017 who studied hard to become a successful product engineer, committing herself to her academic career and valuing the significance of an education.

She founded HackathonGirls, Banjul, where she mentors and supports young women in her community to overcome stereotypes and eventually achieve desired employment in technology.

Juma is also the regional coordinator for Mozilla clubs in the Gambia where she sees that she recruits more club captains in her community by mentoring and supporting them.

As the Mozilla Representative in the Gambia too, she represents Mozilla in her country/region, builds on and supports existing/future local community efforts and programs, support and mentor future Mozilla Reps.

Juma was previously a product engineer at a software development company and is currently the country manager for Kubo, an open school platform in the Gambia.

She hopes to see more women fearlessly obtain careers in software engineering, but her ultimate ambition is to build a community that works together to empower and encourage more females into the field of technology.

Juma envisions a future where her tech club members become future mentors to other girls, ensuring a strong, equitable role on the web for the next generation of women.

In her interview with Nsesa Foundation, Juma admitted she often saw young girls skilled in math and science, lose hope as they prepare for interviews and professional positions.

Believing that more women are needed in STEM, she decided to go into the field as she loves computers.

“The Gambia has women in technology fields, but on average there are far fewer females than males. Right now, many girls in this field leave it because they think computer jobs are too difficult and they lose confidence at some point.”

Juma believes, women/girls are better engineers because they are more patient.

Speaking of her greatest achievement, Juma said, “…having to found an organization called HackathonGirls that is closing the gender technology gap that exists and this has been accomplished by bringing in 30 women/girls studying tech or who are already in tech in the Gambia to work on innovative projects that will advance equality.

“With more than 100 girls currently enrolled in the clubs, Juma is shifting the social stigma about gender and IT, one girl at a time.”

Juma founded HackathonGirls, Banjul, where she mentors and supports young women in her community to overcome stereotypes and eventually achieve desired employment in technology.

The organization teaches web literacy, basic IT skills, and programming languages and organizes several workshops for women in the Gambia.

Beyond web education, the club unites girls in a safe space where they can freely collaborate, learn and share experiences.

As a woman in STEM, Juma said one of the most challenging things was the way technology and the Internet is handled in her home country the Gambia.

“Most people do not know how to use the internet in an inclusive and engaging way especially young girls. Technology is seen as just knowing how to use a computer and therefore they do not know the deeper things they can do with the internet,” she added.

She also spoke of being the only girl in a programming class at University or working in a software company which sometimes discouraged her because her abilities were looked down upon.

“I feared Maths during my high school days but because I have this ‘never give up’ spirit in me I always fought on and I always admired successful people, I was able to overcome that fear and wanted to be always at the top.
“I felt intimidated most times in my programming classes or discouraged but then I said to myself I have started this journey and now is the time to work like a boy. I stayed up late most times to study and actually go through a lot of my work over and over again just to make sure I come out good in my programming classes. I also decided to get an internship at one of the best software companies in the Gambia called InSIST Global where I previously worked as a product engineer.

“It was not easy working and going to school at the same time but this I never regretted as it gave me the leverage to actually develop my skills and put everything I was being taught and even more in practice here.”

To girls in STEM, Juma said, “…nothing good comes easy and to really be successful especially in technology, one has to be strong and persevere. i.e work hard like a man.

“At first, it’s usually not easy especially programming but one thing I say to myself is that I can do it even if it takes me to go over something a million times. My advice to girls who want to go into the field of STEM is to work hard and never get discouraged.”