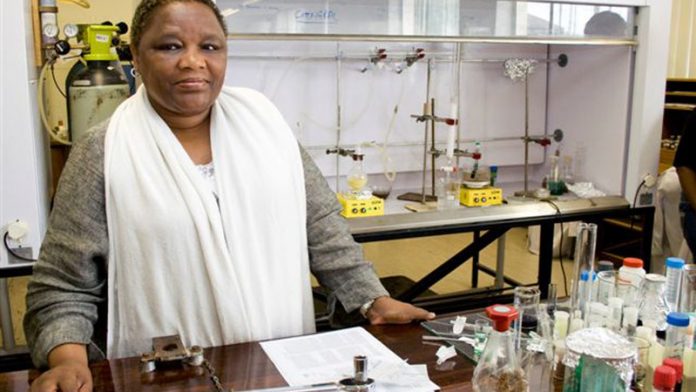 Today’s STEM WOW is the amazing Professor Tebello Nyokong who holds a Department of Science and Technology/National Research Foundation professorship in Medicinal Chemistry and Nanotechnology at Rhodes University in South Africa.

In her interview with Nsesa Foundation, Prof. Nyokong said curiosity and being challenged are what drew her to STEM.

“I also like to know HOW things around us work. I like to break things and put them back together. I did my Science and Maths over two years in high school while others took five years. I even enrolled in advanced Maths. Doing Maths and Science also opens more opportunities. With a Maths and Science background, one can go into any profession. But without them, the opportunities are limited,” she said.

“My passion started with having a good education and was also fueled by my father and my teachers. My main driving force is my passion for Africa. We are viewed as a continent of war and famine, and not as one that is a major player in Science and Technology. In my small way, I wish to change this perception.”

Prof. Nyokong when asked of her greatest achievement proudly said, “Training of high level manpower for the continent of Africa. Capacity building for Africa. My students are in academia, industry, etc. all over the continent and beyond.”

She has successfully supervised 120 PhD/MSc/Post-Doc students and has published over 670 manuscripts.

Speaking on the challenges she faced, Prof. Nyokong touched on the fear of science and a male-dominated workplace.

“Even if somebody tells you “it’s not for women”, remove that fear, it’s not difficult. Like anything else, when you work at it, you can make it,” she encouraged.

She also spoke of the academic loneliness she had faced in her career: “Since you don’t belong in their club, you don’t attend their golf club. You are on your own with no one to share your happiness with and no one to talk to when things are wrong because it’s a man’s world. I think it is only because I am slightly insane that I have the courage to go on!”

“I think that it’s important for young scientists to have role models that are grounded and that are in touch with reality, as this proves that it is possible to advance as a woman in science.

“If they can see that there’s someone who has succeeded and comes from the same background as them and has a husband and children like them, then they can believe that it is possible. I think leading by example is more effective than just talking,” she added.

Prof. Nyokong has been honored extensively for her research both nationally and internationally including being awarded the Order of Mapungubwe: Bronze in 2004, the African Union Kwame Nkrumah Scientific Award, CSIR Medal, UNESCO Medal for Development of Nanoscience and Nanotechnologies, The World Academy of Science Medal, and the South African Chemical Institute (SACI) Gold Medal in 2012.

She is “A” rated by the National Research Foundation and in 2013, was awarded their Lifetime Achievement Award.

She was invited by Secretary General of the UN to be a part of a Science and Technology expert team and has been featured in 21 Icons.

She was included in the National Center for Research on Human Evolution, Spain as one of their “12 NAMES TO CHANGE THE WORLD” and is a 2009 L’Oreal-UNESCO Laureate representing Africa and the Arab States.