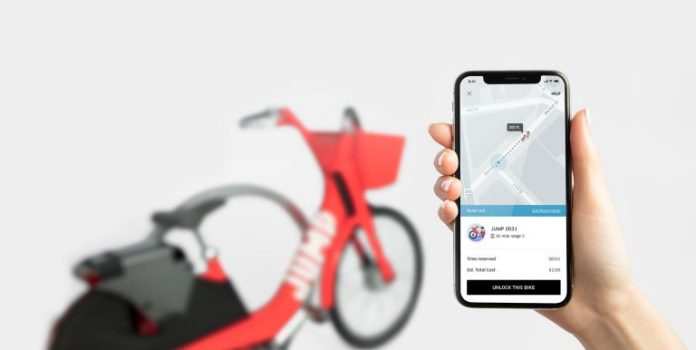 Uber will be launching a bike-sharing service in partnership with JUMP, a startup that recently received the first and only permit to operate dockless bike-sharing in San Francisco .

JUMP’s contract with the San Francisco Municipal Transportation Agency enables it to launch 250 of its dockless, electric bikes in San Francisco.

After the first nine months of the program, the SFMTA may allow JUMP to add an additional 250 bikes to its fleet called Uber Bike.

With this Uber customers will be able to book JUMP bikes within the Uber app.

However the bikes will not be brought to people instead, riders are responsible for going to the location of the bike.

Ryan Rzepecki CEO of JUMP says the partnership is a great way to get a much larger audience on bikes.

“Our ultimate goal is to better connect all the neighborhoods within San Francisco and provide affordable, greener transportation,” he said.

Uber Head of Transportation Policy and Research Andrew Salzberg said they are always searching for options to make transportation affordable and more accessible for people.

He noted how bikes have been on Uber’s mind for some time now but it was a matter of figuring out the right way to try it out.

With JUMP, which recently closed a $10 million Series A round , Salzberg said he sees it as being a good place to start.

“It fits into this larger vision, we think, that there can be multiple modes of transportation that can be made available through the Uber app,” he said.

Uber and JUMP would not disclose the terms of their partnership, other than that the plan is to worth together at least through the duration of JUMP’s 18-month contract with the SFMTA.