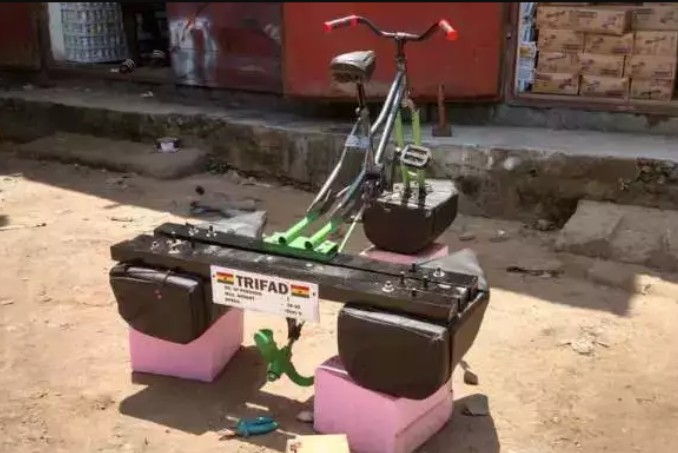 Ghanaian water bicycle inventor, Frank Darko, who was commended for his invention has created another version of his water bicycle.

The new water bicycle, which has been redesigned specifically for children, aims to aid students who have challenges crossing water bodies to school get to school safely and on time.

As a result of that, Frank Darko has indicated that the new additions, which are four in number, would be sent to Gomoa Fetteh in the Central Region to be used by some school children.

The smaller bike, which is a modification of the first invention, has a brand name embossed on it.

Speaking on Connect FM‘s ‘Omanbapa’ morning show he mentioned that a Germany-based Doctor who was impressed with his invention requested the new version of the water bicycle.

According to him, the Germany-based doctor, has secured two acre land for him at Abaasa in the Western Region to start mass production for sale.

Frank Darko who is based in Takoradi caught the eyes of the international media with his invention earlier this year.

He dropped out of school in his second year at the Takoradi Technical University because of financial challenges.

He has, however, been offered scholarship by the same institution to complete his programme of study.

He indicated that he plans on combining his schooling with the production of the bikes and eventually go into full production after schooling.