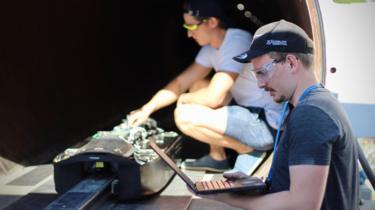 A team of German engineering students have won the third annual SpaceX pod competition in California.

The hyperloop competition saw student teams from universities around the world, develop a pod to travel down a 1.2km (0.75mile) sealed tunnel at very high speeds.

All as part of SpaceX CEO Elon Musk’s vision for a futuristic hyperloop transport system.

Unlike the previous competitions which took place in January and August 2017, the pods did not have the assistance of the SpaceX “pusher” vehicle to help propel the pods down the tube; one of the requirements of the competition was that all pods be self-propelled.

WARR Hyperloop from the Technical University of Munich won the contest for the third time in a row- and set a new record- with the team reaching a top speed of 284mph (457km/h) on the test track.

The other finalists of the competition were Delft University from the Netherlands and EPF Loop from Switzerland who were only able to reach top speeds of 88mph and 55mph respectively.

Technology entrepreneur and SpaceX CEO Elon Musk made an unscheduled appearance at the competition and spent time talking with the students and inspecting the pods.

“This is really the first opportunity to create a new mode of transport,” he said to news site The Verge.

“That’s really what this competition is about: things that could radically transform cities and the way people get around.”

WARR also received one of three innovation prizes, in recognition of the team’s ambitious move to construct two pods: one for the speed competition and another to demonstrate its levitation capabilities.

The University of Washington and Eirloop from Ireland were handed the other innovation prizes.

MTN is Ghana’s Number One Company and Highest Tax Payer for...